Neural networks on a micro controller - Preparation and math

May 23, 2018
I've been playing around with the idea of running a neural network on a micro controller.

This blog post expects the reader to have knowledge of neural networks. For more information, you can check out the following links:

This project is not designed to be the most efficient neural network, but rather one that runs on a micro controller with very limited resources.

The goal is to make a robot on the end of a stick. The robot will have several motorized joints and potentiometers, and will be attached to a center point with a long stick. The center point also has a rotary encoder which measures the angle.

The neural network is a modification of my rust_neural_network crate, modified to run without Rust's standard library, suitable for running on a micro controller. This spawned this no_std branch.

The first concern with running a neural network on a micro controller is simple: there is no memory allocator. This can be solved 2 ways:
Initially both options are a possibility, but then we run into the second issue:

Putting some numbers in an excel sheet gives me the following: 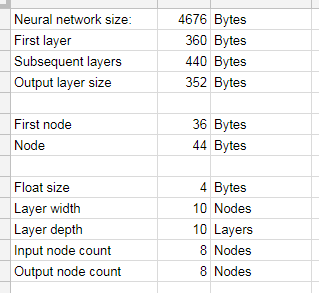 That means if we have 10 neural networks in memory, we'd already be using 46 KB of memory. Our micro controller only has 20 KB ram.

Clearly this is a problem.

But there are some solutions to this:
Applying optimizations 3 and 4, we can do much better. Storing 10 neural networks in flash allows us to use 64 KB / 10 ≈ 6000 bytes of data (we still need to store our program somewhere). Let's drop this into our spreadsheet. 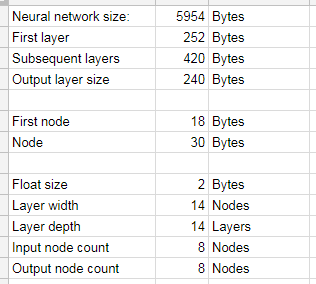 14x14 is 196 nodes, that's almost doubled our initial network size! And now we store an additional 9 in our flash memory to be read in later.

Floating calculations are expensive. In addition, with the usage of an f16 library, we will not have support for hardware accelerated float calculation.

This means we'll roughly need to do 3 000 calculations for a neural network to parse a single set of inputs.

The system does not have to be particularly fast. If it can calculate a value 10 times a second, this is more than fast enough. That still leaves 7.2 million cycles to do 3 000 calculations, or 2400 cycles per calculation. This number seems high enough that the CPU speed does not seem an issue.

So the plan is as follows:
Time to get coding!

If the plan above is not sufficient enough, it is always possible to add an SD card reader, which would allow me to store several GB of data structures. This would allow extensive logging of other data, like all the inputs of all sensors, or every iteration of every neural network. The limitation of 20 KB of memory would still exist, so this cannot scale up the network infinitely.

To get over the memory limit, there is a concept called an External Memory Interface. Currently it is unknown if the stm32f103 supports this feature.